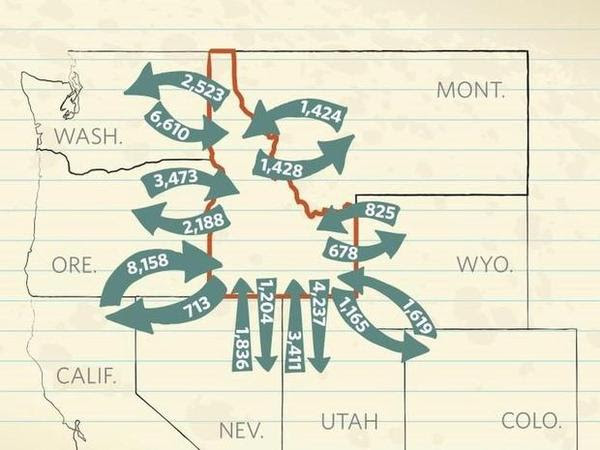 Take a look at the picture above to see how many people are moving to the state of Idaho from Washington, Oregon, California, Nevada, Utah, Colorado, Wyoming, and Montana as opposed to leaving the Gem State.  This is why there is such a high demand for housing in our current market.  Idaho is growing and there is not enough inventory to go around, which is why we are seeing increases in listing prices.  After 2015, the Atlas Van Lines’ annual Migration Patterns study, which tracks the nation’s relocation patterns year-to-year, showed that the following five states possess the highest percentage of inbound moves this past year:

Oregon barely topped the list ahead of Idaho.  Meanwhile, these five states had the highest percentage of outbound moves in 2015:

While now is a good time for sellers to cash in on their home equity, the interest rates for buyers are at an all-time low keeping mortgages down for the time being.

If you know you know. #realestatelife ...

Amazing mountain and city views from this mid ...

Open
Amazing mountain and city views from this mid cent

Boise Bench home that I closed on this week for a ...